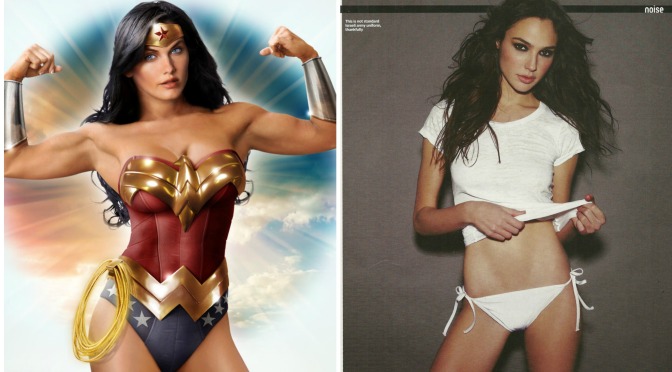 Gal Gadot of the Fast and Furious franchise has been casted to play Wonder Woman in the upcoming Superman vs. Batman film – and there is currently a wave of criticisms from DC Comic fanatics closing in from every direction. And a lot of them are negative. However, although I personally believe Zach Snyder has committed a crime in poor casting, I do believe Gadot has a shot at delivering an excellent portrayal of Wonder Woman.

Let’s remember that Wonder Woman is an exotic character. She is Princess Diana of Paradise Island. She was crafted to have a flawless – or what fanboys might call sexy (let’s be real) – body. According to various versions of Wonder Woman, she is literally a goddess destined to become as beautiful as Aphrodite, the goddess of love, sensuality, and beauty. Essentially, she is the perfect female-being. While Gadot does present this essence in her own way – she is an Israeli supermodel, after all – a crucial element to Wonder Woman’s identity is missing: her resilient presence.

By that, I mean muscle mass.

Beyond her eccentric and outlandish beauty, Wonder Woman is a warrior – and a fierce one at that. Wonder Woman is a broadly built heroine from the Amazon. She faced-off against many-a-foe, including Superman’s arch-enemy Doomsday, and prevailed. For this, she is often used as an icon for feminists in both the comic book realm and the real world. Her character symbolizes peace, justice, and sex equality. Overall, she rightfully generates a feel-good sense of empowerment for women everywhere. Of the few superheroines out there, Wonder Woman is by far the most popular.

On the other hand, Gal Gadot is – well let’s face it – quite frail. This is where I believe most of the criticisms are geared towards. From Googled images of Gadot alone, it’s quite clear that she isn’t exactly built for combat – much less a fall down a small flight of stairs. Upon seeing ribs protrude from her sides, my first impression of her was, “Get thee to a McDonalds!” Her built just doesn’t line up with traditional depictions of Wonder Woman. I don’t mind breaking away from tradition. I just don’t want the character to be unrecognizable.

Now before you bite, realize my argument isn’t for a sexy, double-D heroine proclaiming gender equality while running in high heels and minimum clothing. Portraying Wonder Woman as a sex icon would destroy her image and ruin the film. This isn’t even a stab at Gadot’s size. (Okay, maybe just a little poke.) She’s going to have to pull off a lot more than a pretty face to win over Wonder Woman’s fan base.

The argument is for a woman who immediately leaves us with an impression of strength, power, and independence. 110 lbs. at 5 ft. 9 in. just isn’t going to cut it.  She needs to be convincing. Gadot’s slim, delicate figure punching baddies through walls isn’t. Gadot needs to deliver a hero that women can look up to.

Now remember: some of the greatest actors – men and women alike – have been known to drastically reform their bodies through vigorous physical training and intense dieting for their respective roles in film. Tom Hanks went from 225 lbs. to 170 for “Castaway.” Hillary Swank gained 19 lbs. of solid muscle for “Million Dollar Baby.”  And Christian Bale – my all-time favorite – at 6 ft., 185 lbs. lost an astonishing 63 lbs. for his lead role in “The Machinist,” leaving him at 121 lbs. Then, for his follow-up role as Bruce Wayne in “Batman Begins,” he gained 100 lbs. in merely 5 months!

Even beyond physical gains, the most memorable characters have been made by those who invested their time into their character. They became their character. Remember Heath Ledger when he was casted as The Joker for “The Dark Knight”? Everyone failed to see how he could ever pull off something so demanding. To this day, fans of Batman consider Ledger as the best representation of the Joker today.

This all goes to say that some of the greatest performances were completely unexpected. This isn’t to say that Gadot won’t disappoint. She very well might. However, I think we need to allow her time to truly commit herself to the role, make the necessary gains, and broaden out before we make any judgments. Who knows? She may very well become what we always wanted in a Wonder Woman. As long as she is able to develop the right physique and initiate a dynamic presence, I think we have a movie.

Christian Herrera is a journalism and communication studies double major. He can be reached at herrerac@huntington.edu. The opinionreflects the view of the writer only.