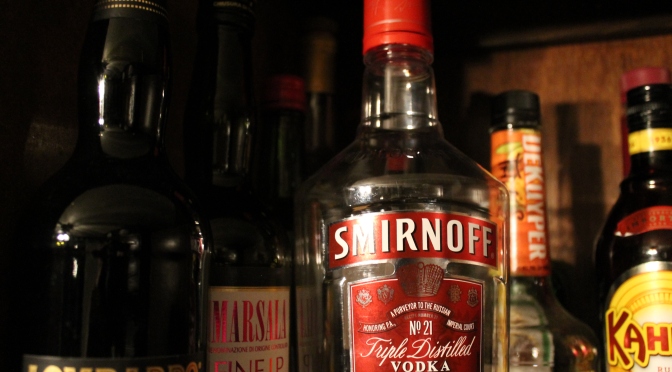 Web Blurb: Students and faculty react to the regulation the university sets on consuming alcohol.

It was the bottom of the fourth inning at the Parkview Field, the Tin Caps was up four runs and with less than 48 hours until graduation, Renfrew and a few of her close friends from home decided to treat themselves to a cold, victory beer, each in celebration of their academic success.

As the game came to a close, Renfrew happened to glance over her shoulder. Three rows back in the section behind her was a lineup of most – if not all – of Huntington University’s resident directors including her own, Rebekah Coffey. Instinctively, she pressed the beer closer to her body to veil it from the RDs behind her.

The Tin Caps lost that day. And so did Renfrew.

Later that night, Renfrew received an email from Jesse Brown, associate dean of student development, inquiring a meet-up before commencement to talk about “something.”

Although vague, Renfrew knew what the email was about.

The following morning, Renfrew was at the Dowden Science Hall when she saw Jesse Brown. She approached him there, “assuming he would understand the situation” because it was her first offense and the occurrence happened post-classes.

On the spot, Brown explained that she would have to pay a $100 fine in order to graduate – and there was nothing she could do about it.

Being Renfrew’s first offense, Kylee Renfrew – Kaitlyn’s younger sister and university alumna — believed her case should have been analyzed and granted leniency.

“Everything – assignments, finals, classes – was finalized,” Kylee said. “Other than the fact that she had to walk across the stage and receive a piece of paper that said, ‘You have graduated.’”

When Kaitlyn Renfrew talked to Brown, “he was nice about it.”

She said she felt the punishment, however, was not fair.

After Renfrew detailed what happened, Jesse Brown explained that the university’s Community Life Agreement — which states that students in the traditional undergraduate program are prohibited from the use, possession and influence of alcohol on and off campus — was enforceable until after graduation.

“By [students] having no alcohol in our community,” Brown said, “I think we feel it makes our community a better place.”

Considering the short amount of time left until graduation, Renfrew was left with no choice but to pay the $100 fine.

“If faculty and staff are allowed to consume alcohol,” Renfrew said, “I really do not see why legal-aged students cannot.”

“I think at this point, there was some agitation from faculty and staff,” Ruthi said. “Some of [them] said, ‘Hey, if the denomination has loosened some of its policy, why shouldn’t the university loosen its policy for the faculty and staff?’ And I think that’s what kind of precipitated the change that we’ve seen.”

A few years after The United Brethren Church changed their rules, Huntington University’s board of trustees followed suit and granted faculty and staff permission to drink alcoholic beverages in moderation under the conditions they consume off campus and not with the undergraduate student body.

Brown said he believes maturity is part of the distinction between allowing faculty and staff to drink and disallowing undergraduates to drink alcohol.

Keeping the policy the way it is, Brown said, is part of what helps shape the university’s community and what the university wants from it.

Ruthi said she felt the question students should be asking is, “What kind of campus community do we want to have?” She said allowing students to drink has potential to disrupt the peace of the university.

When Ruthi was in graduate school, she lived in a graduate dorm for a few years.

“I gotta say,” she said, “I really hated tripping over people in the bathroom who were throwing up and drunk and – you know – there’s booze everywhere. And – ick – it was just pretty nasty. I don’t want Huntington University to be that kind of place.”

Ruthi acknowledged, however, that not everyone on campus is a proponent for a dry campus.

“Students who want that kind of lifestyle, there are all kinds of schools they can go to where they can have their roommates throwing up, drunk on them all day long,” she said. “[But] I don’t think it’s the kind of campus we want to be.”

On the flipside of the argument, instead of concerning themselves with what students “can and cannot do,” Kaitlyn Renfrew said she believes the university should redirect their concerns towards developing an “all-around good student.”

“When I came to grad school, I still drink [drank] occasionally with friends,” Renfrew said. “But because of the way my parents raised me, I know how to control myself. I do not get drunk every time I go out drinking or have a party at my house. The HU bubble would not have prepared me for this year.”

Ruthi, on the contrary, said she doesn’t believe it is the university’s purpose to educate the student-body on consuming alcohol.

“It seems like after you graduate from the university,” Ruthi said, “you have plenty of time – the rest of your life – to figure out if you want to drink, or how much to drink, or whatever. I don’t think it’s Huntington University’s responsibility, really, to teach people to drink.”

One staff member, who asked not to be named, said he believes the university should be creatively engaging the conversation of responsibility and discernment with alcohol, thinking it’s naive to assume students are not drinking while on campus.

“I don’t think we’ll do well to shy away from the alcohol conversation,” he said. “[It’s] an issue that really needs a big, firm foundation … But we don’t give a lot of air space to them. It’s sort of the elephant in the room that we don’t want to talk about.”

At some level, this staff member said he understands why the regulation exists. However, he also said he could entertain the idea of allowing legal-aged students to engage in alcoholic consumption as long as they wouldn’t come back to campus intoxicated.

“I think part of that would allow us to teach discernment,” he said. “I think it’s a little difficult right now to teach discernment because we require complete abstinence. But I’d at least be interested in having the conversation about what it would look like if we allowed students who are of age to drink on breaks or over summer. … As long as you are not under the umbrella of Huntington University in session, then you shouldn’t be under Huntington University’s regulations.”

By signing a contract and being an employee at Huntington University, this staff member said it’s a tricky spot to be in because he is expected to adhere, uphold and enforce campus regulations.

“I am a little bit conflicted about that,” he said, “because I want to applaud the students that are pursing [alcoholic consumption] in a healthy and respectable way.”

Another faculty member, who also asked to remain anonymous, said allowing students to drink off campus without getting drunk “which the New Testament prohibits” could benefit the student body.

“I understand the maturity argument,” he said. “But I do lean toward the idea that it might be good for HU to encourage students of legal age to exercise discipline and responsibility in their use of alcohol.”

Despite the regulation prohibiting legal-aged students to drink, on or off campus, Ruthi, for her part, does not think it’s a bad idea to revisit the policy.

“Societies change, norms change, and people’s views change,” Ruthi said. “I certainly wouldn’t oppose the idea of looking into the policy and [asking], ‘Is it serving our purposes? Is it something we need to change or modify?’ I guess I’m not inclined right off the top of my head to say, ‘Yes, we need to change it.’ But if there are a lot of students who are dissatisfied with the policy, it wouldn’t be a bad idea to look into it, talk through the issues again and see where we come down.”